The Evolution of a Smile

Various implementations of an evolutionary algorithm that aims to reproduce the Mona Lisa with randomly mutated overlapping translucent shapes.

The Death of the Stag, triangles only.

On it’s own, the pixel difference has some really nice properties. For example, there’s always a way to improve, therefore the fitness function is convex and we don’t have to optimize for minima. It also converges nicely on a solution, as with a large enough population, the greatest improvement corresponds to the largest shape on the image.

There are a few reasons why I modified this. For a start, I wanted to get results that used few overlapping shapes to make reasonable approximations. The degenerative case is where the mutation simply adds a shape that improves a single pixel, and the end result would be similar to a raster version of the source.

As mentioned before, raw pixel difference does avoid this as the greatest improvement corresponds to the greatest area shape per generation, however this relies on a large population to maximise the generational maximum.

I wanted to use a very small population to reduce wasted cycles. With a large population you find several improvements, and simply take the best N. Those improvements without this set N are wasted effort. Additionally, the proportion of children per generation that are improvements is small, so the chances of a strain propagating is correspondingly small. Experimentation led me to believe that it’s more efficient to rapidly iterate on a small population, thus incorporating more of the improvement into the fittest group.

In order to encourage the image with the fewest shapes, I therefore add 1% of the pixel difference for each shape used. In practice, this means that each additional shape needs to improve the image by 1%, which should get easier as the overall fitness improves. This does introduce the possibility of local minima however, so the function is no longer convex.

Another experiment I tried was to weight the pixels of the source image by entropy (the combined square of neighboring pixels), and to subsequently weight the pixel difference by this.

With the rust code I first coded a naive version that used a brute force pixel drawing function for the circle generation. I then did a lot of profiling. It was clear that the majority of the time was spent within the inner loops of the pixel rendering.

At this point I also suspected that the allocation of the canvas was also slow. Thinking to kill two birds with one stone, I created a cache of canvases generated from the list of shapes. Because each generation only mutated a single shape, this reduced the amount of computation needed by a massive amount. Because manipulating the last shape in the list is the cheapest, I also weighted the probability of the last shape manipulation.

These optimisations greatly improved the performance, but I also reimplemented the draw functions to use Bresenheim’s algorithm.

In December 2008, Roger Alsing wrote a program that used a genetic algorithm to evolve an approximation of the mona lisa using 50 overlapping polygons. The results were very impressive and his report generated a lot of interest.

I was curious to try it myself, and wrote a quick version in python. At the time, the source for Roger’s program wasn’t available (he’s subsequently released a .NET program with source, although I haven’t looked at it), so I guessed at how the program worked.

Instead of using a fixed set of polygons, I decided to use ellipses because I liked the abstract ‘lava lamp’ look of the intermediary images. Rather than use a fixed array of shapes like Roger, I used a fitness function that encouraged less shapes, and allowed my mutation operation to add or remove ellipses.

Despite experimenting with a bunch of different image libraries the python program was prohibitively slow, only evolving a few thousand generations per hour. I experimented with generation populations, varying between 10 and 100 - it was interesting looking at how adjusting the parameters affected the speed at which the fitness improved. 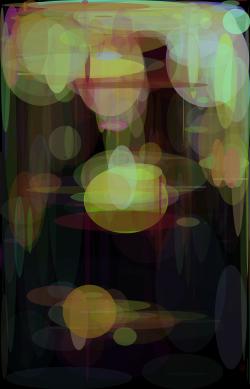 As the bottleneck in the program seemed to be the graphics library, I decided to rewrite the program in C, manipulating arrays of pixels so the fitness function would be fast. Despite my rusty C skills I got a version running and left it overnight on a friends server.

Using a generation population of 100, in 19,000 generations I had something that looked vaguely Da Vinciesque. If you squinted it looked pretty good. Curiosity satisfied, I abandoned the project. 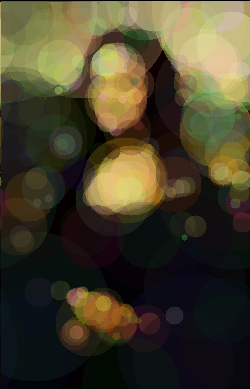 A year later I was playing with html5. I was interested in splitting computation between multiple browsers. One of my projects, a collaborative map-reduce raytracer, uses multiple browsers to render an image into canvas. I was excited by the capabilities of canvas, and started to write more and more javascript. My server side code, a mess of python and mysql, limited the interest I had in doing anything further with this.

A few months later I started toying with the idea of using a couchapp to simplify the collaborative processing backend. Looking through my old projects, the mona lisa code seemed perfect for this, so I rewrote the genetic algorithm in javascript with the canvas.

This time I used circles instead of ellipses. And I add the ability to cross breed between browsers. In 10,000 generations or so, I was getting interesting images. And this time, you could see the images evolving.

Sadly in the intervening period, couchone was bought by couchbase and I neglected to backup the data from the service. Sadly this means that the interesting results were lost.

On a whim, looking for a project to learn more rust, I decided to reimplement this project. This time I wanted to try different shapes, including triangles and rectangles, and to experiment with optimizations to speed up the evolution.